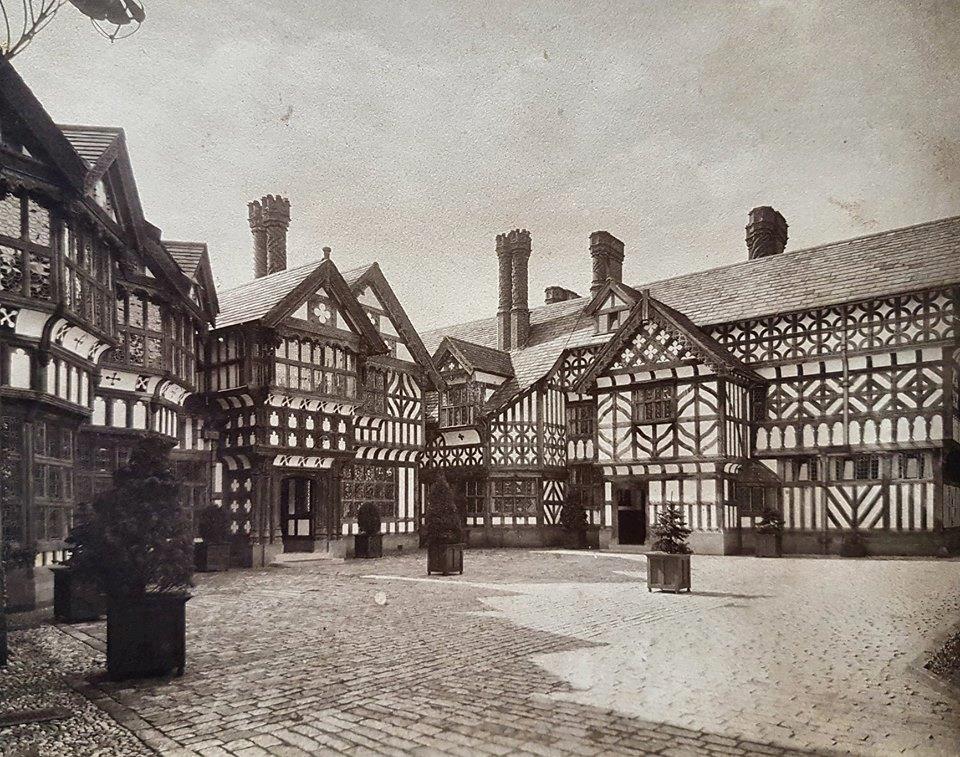 A heritage defined by craftmanship, and an outlook inspired by creativity and innovation.

Step into the world of Contessa Hotels and you will want to stay. Experience a unique sense of style and
beauty in our landmark properties from the irresistible glitz of iconic Art Deco to the lavish opulence of Edwardian England.

Built in 1891, our historic 5 star hotel has the most interesting background and is linked to some of the region’s most influential families who helped put Wirral on the map.

Come and be ‘At Home’ with us at the stunning Grade II listed
Hillbark Hotel & Spa in Royden Park and learn about the fascinating history of one of Wirral’s finest architectural treasures.

A BRIEF HISTORY OF HILLBARK HOUSE

There has been a dwelling place on the summit of this hill for over 1000 years.  Before the Norman conquest there was a Tithe Barn built of sandstone.  The Vikings lived in this part of the Wirral from 902 onwards and it is believed the name Hillbark is derived from Old Norse.  The Tithe Barn was replaced by a large country house in 1868 by a wealthy iron merchant called Septimus Ledward, and in turn the house Septimus built was replaced by the current Hillbark House, which began life in a different location on the Wirral, and with a different name!

This house was originally known as Bidston Court and was built in 1891 five miles away in Bidston by Robert William Hudson, whose family’s wealth had come from their successful soapflake and soap powder manufacturing business. Robert Hudson commissioned the distinguished local architect Edward Ould, to design a ‘Black and White Revival’ house on a site near Bidston Hill in Vyner Road South. Edward Ould specialised in Tudor revival, which was a popular architectural movement from the middle of the 19th century and took as his inspiration the moated 16th century manor house of Little Moreton Hall, near Congleton in Cheshire.

Robert and his wife Gerda, with their two sons Robert and Jocelyn lived in Bidston Court until the house and grounds were rented in1898 to John Lever Tillotson (known as Jack Tillotson).  Jack’s mother, Mary Lever Tillotson, was the eldest sister of William Hesketh Lever, founder of Lever Brothers who later became Lord Leverhulme, and Jack was also involved in the soap manufacturing business, working as Managing Director of Lever Brothers.  Bidston Court was known as one of the finest examples of black and white revival architecture in England, and it attracted the attention of a member of the German Royal family.  No less a person than the German Emperor, Wilhelm 11, Kaiser Bill himself, wanted to uplift and move the whole house to Germany as a new home for his son, Crown Prince Wilhelm and his new wife Crown Princess Cecilie.  He didn’t succeed in moving the house but did have a copy made at Potsdam and called it Cecilienhof Palace.  It was the last palace built by the Hohenzollern dynasty which ruled Germany until 1918.  Cecilianhof became famous as the venue for the historic Potsdam conference in 1945 at the conclusion of the second world war.

In 1921 Bidston Court was bought by Sir Ernest Bland Royden and his wife Rachel.  Ernest was the grandson of Thomas Royden who had founded the world-famous shipbuilders Thomas Royden & Sons in Liverpool, and Rachel was the granddaughter of Septimus Ledward, the builder of the original Hillbark House.   Ernest and Rachel lived in Bidston Court for several years during which time Rachel’s mother died and she inherited Hillbark House. One of the many attractions of Bidston Court was its fine views across the Wirral Peninsula to the Welsh Hills, but by the late 1920s pylons and power lines were beginning to spoil the vista.  The Roydens decided it was time to move away, but they couldn’t bear to leave the house, so they took it with them!  Accordingly, in 1929 the house built here by Septimus Ledward was demolished and Bidston Court was dismantled, transported in its entirety by road to Hillbark and re-erected here.  This massive undertaking took two years to complete.

During the second world war, Hillbark House became a safe haven for orphans of Liverpool seamen, providing them with a happy home until 1949.  Sir Ernest died in 1960 and the house was acquired by the local council, who opened a residential home for elderly people, which remained open until 1984.   The house was empty for several years and fell into disrepair.  In 2002 Contessa Hotels acquired Hillbark and began the mammoth task of bringing it back to its former glory.  In June 2012 Hillbark Hotel & Spa was awarded Five Star status by the AA Tourism Authority.  Hillbark is unique in that it is the smallest hotel in the UK to be awarded five stars, with just 17 bedrooms.

The loving restoration of this beautiful grade 11 listed building has paid off with this recognition and has helped to make Hillbark Hotel & Spa one of the Wirral’s most prestigious and luxurious venues.

We have given you just a taste of the fascinating history and secrets of Hillbark Hotel & Spa.  To have the full experience, why not join us for one of our ever-popular history tours.  Your day begins at 10.30 am with tea or coffee and pastries to help you relax and soak up the ambience.  The tour begins at 11 am and finishes at 1 pm, followed by our delicious Afternoon Tea.

If you would like to arrange a special group tour (for up to 30 people) please contact our History Tour organiser, Dominga Devitt on 07772447275 or email her at [email protected]uk

Altenatively you can purchase a tour as a gift via our online vouchers page.

*Full payment is required to guarantee your place on the tour.

For more information on booking your meeting or conference event at Hillbark Hotel please complete the form below.

For more information on booking one of our Spa Special Offers at the Solaia Spa, at Hillbark Hotel, please complete the form below.

For more information on booking your Spa Day at the Solaia Spa, at Hillbark Hotel, please complete the form below.

For more information on booking your Beauty Treatments at the Solaia Spa, at Hillbark Hotel, please complete the form below.

For more information on booking your Spa Wedding Package at the Solaia Spa, at Hillbark Hotel, please complete the form below.

For more information on booking your facial treatment(s) at the Solaia Spa, at Hillbark Hotel, please complete the form below.

For more information on booking your body treatment(s) at the Solaia Spa, at Hillbark Hotel, please complete the form below.

For more information on booking your special day at Hillbark Hotel please complete the form below.

For the best available rates please book directly with us by completing the form below.